Society normally associated headscarves with certain religions, mainly Islam with its stunning hijab and all its variations such as the shayla, the chador, the khimar to name just a few; the impressive Jewish tichels or the pagri of the Sikh. It is often forgotten that the wearing of headscarves was customary for Christians until the late 19th century, too, now only found in nuns, or smaller Christian groups such as the Amish or the Orthodox churches.

In recent years I have noticed an increased number of fellow pagans and witches wearing headscarves. It is by no means a new movement, it is just more present thanks to social media. But why do pagans and witches cover their hair?

In many cases pagans and witches veil during rituals and spiritual work, out of respect or for protection. Others veil as a sign of dedication to a Goddess. You find a lot of veiling amongst those who worship Hellenic Goddesses or Hecate. But most often when asked the replies are very similar to the reasons why Sikh wear their turbans: a head covering is about confidence, respect, spirituality, devotion and also a sense of pride and belonging. There is no "rule" about how a pagan headscarf should look like - you find anything from tichels, to hijabs, chadors, babushkas, dikhlo and many more varieties, some of them don't even have a name. Still, pagans recognise each other as such. No matter what kind of head covering you wear, your overall style, your jewellery and your image or vibe gives you away as part of the pagan community.

I began considering veiling at the beginning of 2020. I wasn't looking for a way to show pride or belonging. I had been a pagan since the early '90s and never hid the fact either. I was also not looking to demonstrate respect or devotion to a certain Goddess. For me the reason why I considered veiling outside my home was simple: I felt overwhelmed. Grief and trauma had completely thrown me off balance. I know how to ground myself, I know how to connect to the sky above me and how to let Nyfre/Reiki flow through my chakras. But suddenly I felt vulnerable. I felt like I can no longer control the amount of energy that I allow to get to me. I began to suffer from frequent migraines and anxiety and often found myself sitting with my hands covering my head just to find some peace. Covering my head felt like a comforting hug, like a shield that made me feel more grounded. It was the power of Facebook that finally brought me in touch with other pagans who veiled, either full time or part time, or only when they felt like it. My favourite group is Occulta Femina - a sisterhood of multicultural Pagan/Polytheistic women who choose to cover their hair as part of their spiritual practice.

In October 2020, I decided to start veiling when I go outside, when I communicate with people who are not close to me. I talked it through with my husband, who told me from the very beginning that he would support whatever I do, no matter what. Not that I doubted it, but as a couple you discuss these things, at least that is my opinion. But there was a big concern for me: I did not want to be a target for racist morons. My husband laughed when I told him about my concern. He said: who in their right mind would look at us and even dare? Still, I decided to go for a dikhlo style, combined with a tichel. 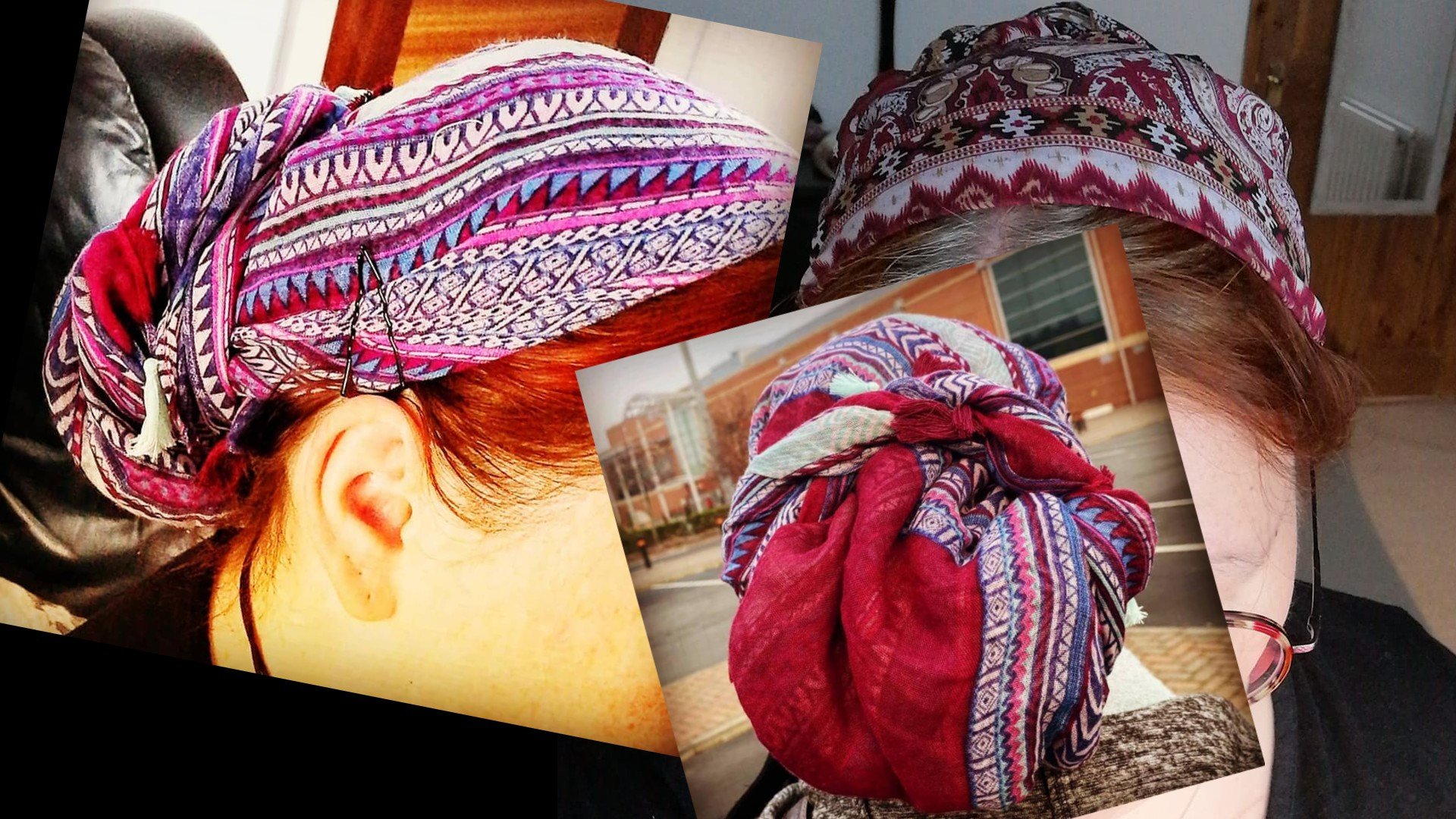 Over time, not only have I found myself more grounded when around people, I felt more stable on an emotional level, and eventually I also began to feel some sort of pride and belonging. But let's not be too spiritual here, I simply began to love the style, too. I have never been fond of my fine hair, so hiding it did me a favour. It's only been a journey of two months and I still have a lot to learn about veiling. Only today have I ordered a velvet anti-slip hairband because the baker's dozen of bobby pins is not working as well as I would like it to. I have also made two shapers. You can buy them but why spend £15 plus if they're easily made from old leggings?

Will I still be veiling next year, in ten years or in 20 years? I don't know. I will veil as long as it feels right for me and as long as I like the style. It is my life, and life is short. And I will finally do what I want. And so should you.