In 1878 a strange looking string with feather knotted into it was found in a derelict house in Wellington, Somerset. The string, with a length of about 5 feet had a loop on one end, and feathers had been inserted along its length.

The label at the Witchcraft and Magic Case in the Pitt Rivers Museum is based on a note that was attached to the object when Anna Tylor, wife of Edward Burnett Tylor, donated the Witch's Ladder to the museum in 1911:

’The “witches’ ladder” came from here (Wellington). An old woman, said to be a witch, died, this was found in an attic, & sent to my Husband. It was described as made of “stag’s” (cock’s) feathers, & was thought to be used for getting away the milk from the neighbours’ cows – nothing was said about flying or climbing up. There is a novel called The Witch Ladder by E. Tyler in which the ladder is coiled up in the roof to cause some one’s death.’

The museum summarised the note as follows:
"Witches ladder made with cock's feathers. Said to have been used for getting away the milk from neighbour's cows and for causing people's deaths. From an attic in the house of an old woman (a witch?) who died in Wellington."

Nine years after the "Witch's Ladder" was found, folklorist Dr. Abraham Colles visited Wellington and after speaking to locals, whose assumptions that the object must have been made for magical use, Colles was eager to ascertain how this "Witch's Ladder" had been put to magical use.

In 1887 he wrote an article for Folk-Lore, the magazine for the Folk-Lore Society, where he describes how the "Witch's Ladder" was found and the little information he had for its use. It was the American folklorist Charles Godfrey Leland, who during a visit to Tuscany, heard about the Witch's Ladder and claimed that local Italian witches used something similar which he called a "Witch's Garland". The Witch's Garland - or ghirlanda - apparently was made from black cord and black hen feathers, and a malediction, or curse, was spoken into each knot that was tied into the black cord. he even claimed that the feathers were plucked from live hens and the feathers poked through each of the cursed knots. The garland would then be placed under the victim's bed or inside the mattress. Leland continues stating that such a curse could only be lifted by finding the garland and the hen that the feathers were taken from. Throwing both into running water, the bewitched had to be taken to church where a baptism was carried out and where they had to recite certain spell before bathing in holy water. 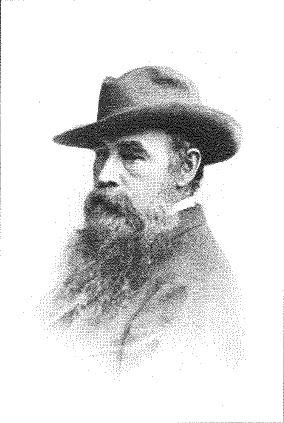 Charles Godfrey Leland (pictured above) is probably best known as the author of the book Aradia, or the Gospel of the Witches published in 1899 - a book now known and criticised for the author's rather liberal invention of what he called "facts". English historian and Professor at the University of Bristol, Ronald Hutton argues that – rather than basing his work on a lost pagan scripture – Leland may have made the whole thing up. So even if Leland had indeed discovered that Italian witches knotted curses into garlands, considering his tendencies for inaccuracies and and exaggerations his claims can’t be considered reliable.

Edward Burnett Tylor, Professor of Anthropology at Oxford University and Keeper of the Oxford University Museum of Natural History presented the Witch's Ladder to the British Association for the Advancement of Science in September 1887 and was told by two members of the audience that what he presented to them was not at all a "Witch's Ladder" but a sewel - a stringy, scarecrow-like item made from a cord and feathers, which is hung up to discourage deer from breaking into gardens and fields. Fairly disheartened, Tylor was reluctant to display the witch’s ladder at the 2nd International Congress of Folklore in London in 1891, stating, ‘From that day to this I have never found the necessary corroboration of the statement that such a thing was really used for magic.’ According to the congress catalogue, however, he did indeed bring the Witch's Ladder.

Tylor kept researching the ladder's authenticity. In 1891, however, Tylor wrote that though ‘the popular opinion’ was that the ladder was a magical artefact, ‘unsupported opinion does not suffice, and therefore the rope had better remain until something turns up to show one way or the other whether it is a member of the family of sorcery instruments.’ 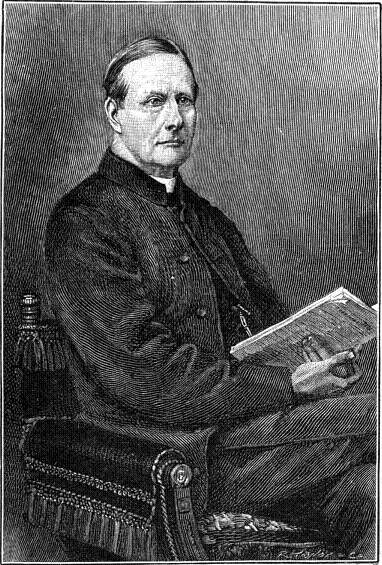 Reverend Sabine Baring-Gould (pictured above) included an extensive article on the Witch's Ladder in his novel Curgenven published in 1893, describing the ladder as being made from black wool with white and brown thread, and every two inches it was tied around a cock's feather. The maker would weave aches and pains into the ladder and the only way to release the curse, was to thrown the ladder into the Dozmary Pool in Bodmin Moor.

Hoping that the learned folklorist and seasoned researcher would help him find evidence for the authenticity of the Witch's Ladder, Tylor sent a letter to Reverend Sabine Baring-Gould in 1893 asking him which sources he had used for the Witch's Ladder in his novel. Baring-Gould's reply was sobering:

’I wish I could give you any thing certain about witch ladders. [...] What I put into Mrs Curgenven about sinking the ladder in Dogmare (Dozmary) Pool so that, as it rotted, the ill wishes might escape was pure invention of my own. I felt they must be got out somehow & so created a fashion for liberating them.’

Trying to help Tylor in his research, Sabine Baring-Gould went as far as asking Marianne Voder, an alleged witch, about her knowledge of a Witch's Ladder to which she replied that she knew nothing about such thing and 'thought what you got at Wellington was nothing but a string set with feathers to frighten birds from a line of peas.'

Taking into consideration that the famous Somerset "Witch's Ladder" very likely was not at all magical, the question why "Witch's Ladders" are such a popular magical item amongst Neo-Pagans and Witches in our times arises. Neo-Pagan, Wiccan and Witch culture of the 21st century has mainly been influenced by authors such as Gerald Gardner, Margaret Murray and Charles Godfrey Leland, all of them members of the Folk-Lore Society. All of them had heard of the Somerset Witch's Ladder and it found its way into their writings and from there the history of a Witch's Ladder spread into the world of Neo-Paganism and Witchcraft.

"But wait, if the Somerset Witch's Ladder is not real, are we all following a lie?"

No. As we all (should) know, witchcraft is based on intention and on creating your own tools where appropriate. And making use of an idea is never a "lie". Knot magic is a kind of magic, using strings made of leather, wool, cord, hair, whatever you can think of. The use of feathers has long been a tradition in witchcraft, too. Now modern witches have began to combine the idea of knot magic and stick like objects such as feathers, actual wooden sticks, plant twigs, bones etc. to re-create the idea of a Witch's Ladder. Some call their objects Witch's Ladder, others call it something else. How these modern witches turn their intention into visible objects is their decision.

When I first read about the Somerset Witch's Ladder, I accepted that what was found in the attic in the old Wellington home might not have been magical and merely a little tool to "frighten birds from a line of peas", however, I like the idea behind it. The idea of combining knot magic with tree magic, with bone magic, with plant magic. I did not try to re-create the Somerset Witch's Ladder, I created my own Witch's Ladder. Made from the objects I chose, and my own intentions.

Always remember, make magic your own. Use ideas to manifest what you need and want. And if someone tells you that you can't use a block of butter to dissolve a crisis simply because you have no candle at hand, or because you don't like candles, then give them my regards and tell them that every witch over the last how many centuries made her own tools. Blindly following the masses only leads you directly to the slaughterhouse.

Images courtesy of England: The Other Within and Wikipedia Commons Media.

witchcraft folkmagic
One black candle, hair of unicorn and eyes of a newt.. or not?
Corvus Corax... you are a mystery to me
Sigils
Comments
I BUILT MY SITE FOR FREE USING